Strength, confidence and love of life are key qualities of the American Pit Bull Terrier. He shows his versatility by successfully competing in obedience and agility at sporting events with other fighting and service dog breeds. Through the years the Pit Bull has finally evolved from a terrifying warrior into a pet.

A breed that was created for fighting, nowadays is used for purposes that are far away from violence and cruelty, such as body guarding or competing in agility competitions. The American Pit Bull Terrier is an excellent hunter and an enduring traveler. Their skills are often used by police forces.

Pit bull–type dogs have a controversial reputation both in the United States and internationally, due to their history in dog-fighting, and a number of high-profile attacks documented in the media over decades, and proclivity to latching on while biting.

Back in the 19th century, dog enthusiasts in England, Ireland and Scotland began experimenting by crossing bulldogs and terriers, looking for a dog that would combine the agility of a terrier with the strength and athleticism of a bulldog. The result was a dog that embodied all the virtues attributed to great warriors: strength, invincible courage and gentleness with loved ones. Immigrants brought them to the United States.

The talents of the American Pit Bull Terrier did not go unnoticed by farmers and ranchers, who used their Pit Bulls to herd semi-wild cattle and pigs, to hunt, to walk cattle and as family companions. Pit Bull Terrier (from “pit” – fighting pit) means a fighting bull terrier. He was originally called a “pitdog” (fighting dog), a “half and half”, a “bull terrier” (bulldog and terrier), “American bull terrier,” “Yankee terrier.”

Development of the Breed

American Pit Bull Terriers have always been quite a popular breed in America. They were widely used for dogfighting along with other dog breeds. Bulldogs and terriers were used in the creation of the breed. From the former Pit Bulls gained strength and tenacity, and from terriers lightning-fast reaction speed, which made this breed a real machine for fighting, hunting and rescue searches.

After dogfighting was made illegal in the United States, American Pit Bull Terriers were strictly controlled, and the breeding of these dogs was banned. In order to get the support of ordinary citizens, the media constantly published cases of Pit Bull Terriers attacking people with horrific photos and comments.

Today, the American Pit Bull Terrier is very popular both in the United States and in other countries, but banned in several European countries. Pit Bull Terriers are good at the service of the American police force. They have an excellent nose and specialize in searching for drugs and explosives. It is strictly prohibited to train Pit Bulls in disciplines involving aggression to humans due to the requirements of the breed (increased loyalty to humans).

The Pit Bull is a strong medium-sized dog with a very powerful muscular build, a broad powerful chest, a massive neck, a large wedge-shaped head and a broad powerful jaw. Paws and thighs also massive and strong, medium length tail wide at the base, but slightly tapered to the end.

Pit bulls are divided into two main types: terriers and bulldog type, also there are these two mixed types. Weight is not strictly limited and can vary (See table above). The ears may be cropped, or not. Tail could not be trimmed. A dog’s head can be as wide and short as bulldog style or narrow – terrier-style.

Coloring of Pit Bulls’ coats may be absolutely any color except white and merle. The most common colors are all shades of brown with occasional light patches. The coat itself is short, smooth and glossy. At the same time, the color of the nasal lobe must always match the main color.

If trained incorrectly, the dog can be aggressive and extremely dangerous, so the beginning dog breeder should not experiment. This breed is suitable for an experienced dog breeder.

Aggression to humans is not typical for this breed, so they are the perfect companions for families. Pit Bulls are often eager to please and overflowing with enthusiasm, and have a particularly warm attitude toward children. These dogs love their families and are very friendly to guests. But they show a wary attitude to intruders and are great watchdogs, warning their owners of strangers with loud barking. You don’t have to worry about walking down a dark street, because the Pit Bull will always stand up for you and protect you, even if it costs him his own life.

The Pit Bull will have a moment in his life when he will start to prove he is the leader of the pack. The main thing is not to miss this moment and show who is the leader here. Because of their fighting background, Pit Bulls can be quite aggressive with other animals, but with early socialization this behavior can be minimized.

The Pit Bull Terrier will be more comfortable with his owner’s family, because long periods of isolation may negatively affect the dog’s psyche.

As for the relationship between Pit Bulls and children, dogs love them very much. This breed will be an ideal friend for your kid, but it’s worth remembering that it’s still best not to leave them alone. Only allow your child to interact with the dog when you are present. Teach your children not to hurt the dog – not to pull his tail or pinch him.

American Pit Bull Terrier feels quite well in an ordinary city apartment, but they just need regular sports walks and socializing with their buddies. Any kind of physical exercise will suit the dog. He likes running, jumping, hanging on a rope, swimming, tug0of war games.

You should teach obedience to Pit Bulls from infancy and throughout their lives, and remind them who is the master. Experts advise owners of this breed to visit a dog trainer and take a training course so that the dog learns the basics of obedience.

After the Pit Bull learns the most basic commands, he may begin to serve as a guard dog. He has the intelligence, alert ears, instinctive sense of smell and hunting skills to do this.

Remember that early socialization is very important for Pit Bulls. Introduce them to other people, new places, sounds and smells as early as possible.

No Aggression or Cruelty in Training

If you decide to train the Pit Bull by yourself, remember – no aggression or cruelty on your part. The Pit Pull must learn through play !!

The description of the breed allows both natural and dry food:

The basis of the diet should be proteins – meat, fish, milk, as well as liver and kidneys for building the dog’s muscles and bones. Vegetables and eggs are also added to the diet.

The two main rules are:

Pit Bulls are very common all over the world. These sturdy, playful dogs bring a lot of positive emotions into the home, make great babysitters for children, and become loyal friends and courageous guards to their owners with proper care and training. 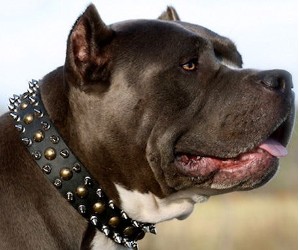 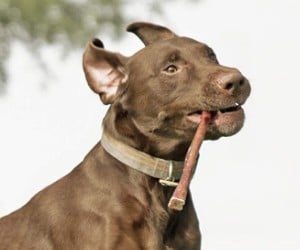 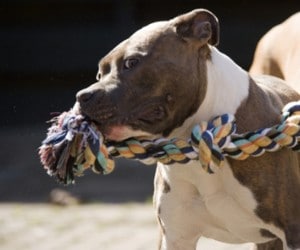