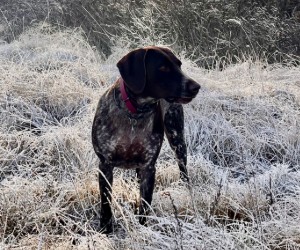 Being informed about pets facts and events means being in the mainstream of all important upcomings. You will find here latest info on pet travel regulations, tasty dog food and treats producers, exhibitions schedule and many more. Be always up to date! Interesting facts about dogs, records, saved dogs, and much more! No singe day without fresh event - that's our target for our audience!

'A dog occupant tried to escape on foot. Oregon State Police stated that the officer's "dogged pursuit for peace and justice" combined with his cat-like reflexes allowed him to immediately take custody of the animal and safely return it to its owner. … END_OF_DOCUMENT_TOKEN_TO_BE_REPLACED

Nottinghamshire Police warned the public about leaving pets alone in vehicles during hot weather after they rescued of a distressed Shih Tzu. … END_OF_DOCUMENT_TOKEN_TO_BE_REPLACED

Carie Broecker, founder of Peace of Mind Dog Rescue. A dog rescue program specialized to help the dogs of the elderly has allowed hundreds of dogs to stay with their owners who could no longer physically take care of them. The program also takes in and finds homes for dogs who have to be put up for adoption in the case that an elderly person has to enter a care home or … END_OF_DOCUMENT_TOKEN_TO_BE_REPLACED

The Dogs Trust has received a record number of "handover" calls from distressed owners fearing they cannot afford their dogs, while the RSPCA has taken in more rabbits, cats and dogs than last year. (File pic) Pet-owners are increasingly unable to afford their animals as the cost of living crisis bites, according to welfare charities. The Dogs Trust has received 15,000 calls … END_OF_DOCUMENT_TOKEN_TO_BE_REPLACED

Police believe the animals were smuggled in from the Republic of Ireland, and they would have been taken to England or Scotland to be sold. In total, police seized 60 animals Dozens of illegally imported puppies have been seized in Northern Ireland as part of a police operation targeting animal smuggling. A 44-year-old man has been arrested following the operation at Belfast … END_OF_DOCUMENT_TOKEN_TO_BE_REPLACED

The entirely pawsible invention re-tails at PS60, and will be perfect for keeping pets cool in intense sun (when it is not raining cats and dogs). However, such is its standout style, they might find themselves hounded by the puparazzi.... Moco, a Pomeranian and Poodle mix, models one of the new cooling outfits A Tokyo-based clothing manufacturer has joined forces with … END_OF_DOCUMENT_TOKEN_TO_BE_REPLACED

TAMIRIS MUZINI - releasedDouglas Robert and Tamiris Muzini were ready for their big day, when they would commit to celebrating happily ever after together, but Tamiris didn't know there was someone else. As the blushing bride arrived at the church, she noticed a wedding crasher had come by--a stray blonde dog that was mingling gently with guests. The ceremony began with the … END_OF_DOCUMENT_TOKEN_TO_BE_REPLACED

Lieschen O'Connor / SWNSMeet Belle, whose doctor diagnosed her with a birth defect that makes her look permanently surprised. The adorable mix of doberman and cattlehound was born with the muscles in her head stretched back, leaving her looking wide-eyed at all times. Lieschen O'Connor adopted Belle in 2017 from Lawrence Humane Society, an organization that provides care for … END_OF_DOCUMENT_TOKEN_TO_BE_REPLACED

The findings bear out stories from vets who have described blind dogs acting completely normally - playing fetch and not bumping into things. Dogs might be using their highly-sensitive noses to 'see' as well as to smell, a new study suggests. A team of vets, including Dr Philippa Johnson from Cornell University in New York, discovered that vision and smell are actually … END_OF_DOCUMENT_TOKEN_TO_BE_REPLACED