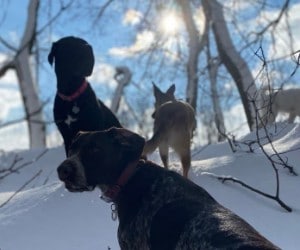 Being informed about pets facts and events means being in the mainstream of all important upcomings. You are looking for fresh product range of your favorite toys? - Here they are! New upgraded release of a harness or collar?  - No problem!  You will find here latest info on pet travel regulations, tasty dog food and treats producers, exhibitions schedule and many more. Be always up to date!

The story of a faithful dog Rini from Makarov in Kyiv region, who spent a month on the doorstep waiting for her owner, who was killed by the Russian occupants, got a happy ending. The new owner of "Makarov Hachiko" found out about the dog from the posts on social media. - The adviser to the head of the Ministry of Internal Affairs Anton Gerashchenko reported about … END_OF_DOCUMENT_TOKEN_TO_BE_REPLACED

The controversy over a charity's animals being evacuated from Afghanistan in August has reared its head again after emails from Foreign Office staff were released. Pen Farthing. Pic: Nowzad Pictures of mothers handing their babies to soldiers as they desperately tried to get them out of Kabul as it fell to the Taliban are etched in many people's minds. But it was a … END_OF_DOCUMENT_TOKEN_TO_BE_REPLACED

For now, the only chance to accurately know if your pet is pregnant is to have an ultrasound test after 3 weeks or more at a veterinary clinic. But soon this may change! A Finnish diagnostics company is launching the first quick pregnancy test for our furry friends which should be available in pet shops around the world in the near future. This novelty enables the diagnosis … END_OF_DOCUMENT_TOKEN_TO_BE_REPLACED

Congratulations to the dogs and their happy owners! Main Boxer Features: Easy-going good-natured temperament Stable nerves Brightly expressed nature Childlike spontaneity Sensitivity Boxers' Origin The homeland of the German boxer is Germany. Exactly in this country the appearance and character of the breed was formed in Munich. The Boxer Floki, derived … END_OF_DOCUMENT_TOKEN_TO_BE_REPLACED

Did You Know? In February 1944, an American soldier found the dog in an abandoned trench in the jungles of New Guinea. An Ohio corporal, William Winn, bought her for 2 Australian pounds. Over the next two years, Smokey was with her owner in the Pacific theater of war. The dog participated in 12 air and sea rescue and photo reconnaissance missions. During these operations, … END_OF_DOCUMENT_TOKEN_TO_BE_REPLACED

COVID-19 restrictions and quarantine made many people feel lonely and isolated, thus bringing luck to many pets from the shelters, and giving birth to new dating apps. Now you can try luck on the new dating apps Dig and Tabby Dig is for those who love dogs or have dogs and would like to connect with like-minded mates. This app helps to find a compatible match and plan a … END_OF_DOCUMENT_TOKEN_TO_BE_REPLACED

A one-year-old Border Collie from the Welsh town of Dolgellau (Gwynedd, north-west Wales) is listed in the Guinness World Records as the most expensive sheepdog in the world. According to the Guinness World Records, the Border Collie dog, Kim, was sold at auction for $38,800. They bought the dog at an online auction, organized by the Farmers Marts auction house, on 3 … END_OF_DOCUMENT_TOKEN_TO_BE_REPLACED

Kurgo Stowe Base Layer - Super Warmth in Cold Winter Days The leading Dog Products Leader Company Kurgo has launched a very special product for active dogs, mostly for short-haired ones, who need some additional warmth during long walks in winter and early spring. Normal waterproof jacket is good, but not enough to cover all body and to keep warmth of such a dog, as it … END_OF_DOCUMENT_TOKEN_TO_BE_REPLACED