According to FCI, the Bernese Mountain Dog (Berner Sennenhund, or Dürrbächler) is originally a watchdog, herding dog and pulling dog on the farms in the canton of Bern, today also family and versatile working dog. This sturdy farm dog was bred in the Alps of Switzerland. Confident, alert, vigilant and fearless in everyday situations; good-natured and affectionate with familiar people, confident and peaceful with strangers; medium temperament, good leadership. These dogs are also adaptable to a variety of different climates and environments. If you are looking for a loyal and loving companion, the Bernese Mountain Dog is the perfect dog for you. Patience and steadiness turned them into almost perfect family pets. They are not capricious in training and easily learn the commands. In addition, they inherited from their ancestors excellent watchdog skills, which they gladly use as soon as the opportunity arises.

We’d like to add by citing AKC: “Distinctive markings on the coat and face are breed hallmarks and, combined with the intelligent gleam in the dark eyes, add to the Berner’s aura of majestic nobility”.

Bernese Mountain Dogs are extremely kind, obedient and loyal friends who will not torment the owner with the demand for attention and a stormy temperament. Berners are calm and infinitely wise, but they are quite capable of showing their feelings. Representatives of this breed are typical family dogs. By the way, despite the fact that Berners are not considered to be perfect baby-sitters, they treat children protectively, with a feeling of slight superiority and do not respond with aggression to their annoying naughty behaviour.

In general, Berners are patient and affectionate, respecting humans. Speaking about respect: the Bernese Mountain Dogs treat strangers calmly, without aggression, but without much sympathy. Usually only one member of the family is the most respected in the eyes of the pet. This, of course, does not mean that the rest of the people the dog does not obey. Just the commands of the owners of the “second plan” the pet will not perform that actively. Despite a slight laziness and love for sleep, which from time to time you can see in Berners, they gladly take part in outdoor games. However, due to their character, they do not like to play for too long.

They are friendly, alert, vigilant and sweet working breed… Truly loyal, committed and loving…This is a sensitive and soft breed, it does not need harsh punitive training. It’s very responsive towards people, so just good firm positive reinforcement is usually what is needed to get a good well-behaved dog…

Young individuals are usually very inquisitive and a bit careless, they like to play around a bit, but never overdo it. Mature and experienced dogs are calmer and more phlegmatic. These giants don’t run after a cat or other simple provocations. Bernese Mountain Dogs love to play helper, guide and guard game. They are happy to carry their master’s small purchases or protect him from other dogs. And the Berner also makes a fine animator: teach your pet to walk in a sled and he’ll be glad to take your children for a spin in the cart. The legendary fearlessness of the Bernie breed brings them more trouble than good. The representatives of this breed often make unnecessary feats such as jumping from the balcony that are disastrous for the dog itself.

The Bernese Mountain Dog must be trained and the earlier you begin to teach him commands, the better for both of you. In spite of their calm look, Bernese Mountain Dog are very sensitive dogs, so you should not shout at them, as well as to use physical violence. In upbringing it is recommended to show a certain firmness and persistence: for missteps to the puppy you should make suggestions in a strict tone (the system of punishments to small puppies, as a rule, is not applied).

The age of 4 to 8 months is the period of maximum disobedience and naughtiness. During this time the dog is teething, so the Bernese Mountain Dog is actively trying out the surrounding reality. Sometimes not only slippers and shoes, but also the fingers of family members become the object of attention.

From the first months of life, start gently discouraging the dog from spontaneous jumping up and down. While the pet is small, this expression of affection is genuinely endearing, but when, after a couple of years, a shaggy 50-kilogram body will be jumping into your arms – it will no longer be a pleasure.

Important: The Bernese Mountain Dogs mature later than other breeds, so complex training should be practiced only with pups that are two years old.

You should start training your pet with wearing a collar and simple commands “Come here!” and others. Even a pet of a month and a half old can learn these simple lessons. Do devote 10 to 15 minutes a day to puppy training so he won’t tire himself out, and make sure to use tasty treats, either from the pet store or from your own hand-made treats. And by no means overdo it. Discipline should not turn into a taboo that restricts his freedom: after all, for normal development a puppy needs to be in contact with things and other dogs as much as possible. Those who see their Bern as a guardian should develop the dog’s ability to differentiate between fellow humans and strangers. This also includes such a skill as refusing to accept treats from the hands of a stranger. Exceptions are not allowed even for “good acquaintances”.

The Bernese Mountain Dogs should be walked twice a day, and it is advisable to combine walking with vigorous physical activity. You can make him run or engage in some light play to burn extra calories and increase muscle tone.

Since Bernese Mountain Dogs shed heavily, they should be brushed every day. But it is not necessary to bathe the dog too often. A bath day for this breed should be no more than once a month, unless your pet gets thoroughly dirty during a walk. While washing the head of the dog, it is preferably not to wet it at all, to avoid getting water in the ears. Shampoo is used when necessary and in very limited quantities, and the hair dryer is only used to dry mature dogs. After bathing, the excess moisture should be removed from the coat with a towel and the pet should not sit in a draught until it dries. After it dries, the hair is combed out.

The ears of the Bernese Mountain Dogs should be inspected once a week. If you walk the animal in a wooded area, it is better to check after each walk. Contamination from the ears is removed with a cotton pad dampened with boiled water. The use of cotton swabs is not recommended, in order to avoid damaging the hearing organs. The nails of Bernese Mountain Dogs should be trimmed every two weeks. Removal of yellow plaque from the surface of the teeth is done with a special paste applied on a cotton swab once or twice a week.

How to Feed the Bernese Mountain Dog

Puppies two months old are fed up to 5 times a day, three months old are fed 4 times, seven-month-olds are transferred to three meals a day, and by the age of one year, the dog should eat twice a day. A pet under two months of age should receive daily fermented dairy products such as cottage cheese, sour milk or yogurt. Milk in its pure form is not allowed. Meat is introduced into the diet of the Bernese Mountain Dogs gradually, in combination with cooked cereals and vegetables.

The “menu” of an adult on a natural diet must necessarily include lean meat or by-products, fillet of sea fish (frozen), sour milk products. Together with meat, it is recommended to give vegetables (carrots, pumpkin, broccoli), and for “dessert” the pet can be pampered with a piece of banana, apple or pear. The amount of cereals consumed by the animal should be at least 10% of the total diet. A couple of times a week, the Bernese Mountain Dogs can be treated to a raw egg yolk or a hard-boiled egg.

Owners who prefer to give their pets dry food should look for low-fat food (16% or less) and protein content of 18 to 26%. Try to choose varieties that are free of soy, corn and wheat. A healthy adult should eat between 1,800 and 3,000 kcal per day, a two-month-old puppy about 600 kcal, while an older, inactive dog should have 1,500 kcal.

Health and Diseases of the Bernese Mountain Dog

The Bernese Mountain Dog is a dog with a good heredity, but the inevitable companion of “apartment” dogs – hypodynamia and constant stress can seriously undermine the health of the pet. The average life expectancy of a Bernese shepherd dog is 8-10 years. Provided there are no serious illnesses and high quality care, some representatives of this breed live up to 13 years, which is a kind of a record.

You should take a Bernese Mountain Dog puppy at the age of 2 to 6 months. Males of this breed look more respectable due to their impressive size, but are more difficult to train, they are rather dominant. Females are more obedient and intelligent.

Otto Cordari, one the best Swiss breeders, also proves this:

Be sure to check out the kennel environment by taking a look at the enclosures where the dogs live and carefully studying their living conditions and standard menu.

We have visited Zucht Holzhuesli-Chalet and talked to Mr Otto Cordari, a famous and well-reputable breeder in Switzerland. At his premises you feel immediately that this place is not just for breeding puppies according to breeding standards, but this something bigger, made with heart warmth and passion. They sell puppies all over the world, like USA, Canada, Germany, and many more, and of course – Switzerland. If you buy a puppy from this breeder or other officially registered in Switzerland, you can be sure of no blood-mix, as there is a special database where the breeder can check if the dogs are allowed to have puppies together. All this important to be sure of future puppies health. Puppies are weighed according to the schedule, observing their growth and development. They have space room to sleep and a nice green field with playground. From an early age, pups listen to music and play with bells, just like on cows during herding. This way they get used to being calm and balanced even in noisy environments.

Getting to know the puppy’s parents and their veterinary history won’t be a waste, either.

Agile, playful and inquisitive puppies are most in demand: this behaviour signals that the pet is healthy and maintained in appropriate conditions. At a young age a Bernie may have a different coat structure: it may be too straight or, on the contrary, curly, and have a grayish shade. All these features are not considered defects and disappear with age.

History of the Breed

The original Bernese mountain dog was an all purpose farm dog used to herd cattle, protect the farm and pull milk carts to the local dairy. The name Bernese mountain dog roughly translates from the German “Berner Sennenhund,” which literally means Bernese Alpine herdsman’s dog. The breed’s original name was Durrbachler, after an inn where these farm dogs were bought and sold.

Professor Albert Heim preserved the breed from near extinction around the turn of the century. He continued to carefully develop the breed, and by crossing with a Newfoundland, he improved the dog’s temperament and size.

Berners arrived in the U.S. in the early 1900s. And the American Kennel Club first recognised the breed in 1937. They’re now regularly one of the most popular dog breeds in the country. 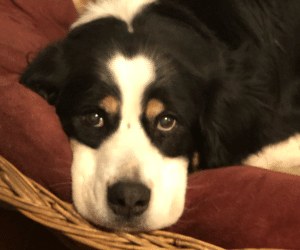 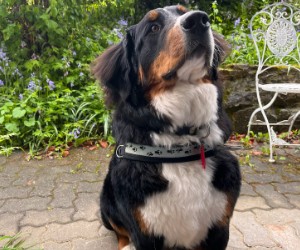 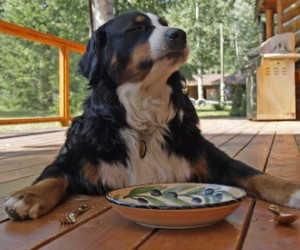 How to Feed a Bernese Mountain Dog Puppy?