Why to Use a Crate for Spaniels?

Some first-time fur owners freak out when they hear suggestions about buying a crate for their Spaniels. No matter we are talking about King Charles Spaniel, American Water Spaniel, Cocker Spaniel or Springer Spaniel. It’s understandable. Dogs are not like birds or small animals that tend to go everywhere. Dogs deserve freedom more than anyone else. They deserve to be comfortable in their home and around their family. But not until everything in the house is messed up: missing shoe, destroyed furniture or pillow fillings are scattered everywhere. At this point, the idea of buying your Spaniel his own crate is not scary anymore. Then it’s time to start looking for the best size crate for a Spaniel.

5 Reasons to Buy Crate for a Spaniel

What Size Crate for a Spaniel?

Ideally, crate training is more applicable for Spaniel puppies. The earlier they are trained, the better. There’s no right size for a Spaniel. However, there are some important conditions:

But, if you’re going to choose a crate for your Spaniel puppy and you don’t want to change it as he grows, ask for the size of his parents. Recommended crates should not be shorter than the length of the dog, thus it can be longer. On the safer side, you can measure your Spaniel’s height while sitting and width while laying down.

Choose the crate that is high and wide enough, so that your dog can freely sit, stand, turn, and lye around comfortably. Getting a spacious crate will allow your dog to sleep in one corner and have his own space until he grows up. Dogs do not do potty where they sleep and eat. That’s why the crate should be the exact size of your dog. Your puppy will grow up to become a big dog. Since Spaniels are medium to large-sized dogs, you have no choice than to buy a crate or kennel with a divider that will allow you to increase the space as puppy grows.

There are four main Spaniel breeds, so the best size crate for an adult Spaniel depends on the breed as well:

This is Medium and Intermediate crate sizes, depending on the manufacturer’s scheme.

Types of Crate for Spaniel Puppy and Grown-Up

Pet stores have a variety of crates for dogs: small plastic kennels, metal crates, soft fabric carriers, etc. There’s no such thing as one-size-fits-all. There are considerations and decisions that only the owner can choose what to purchase.

Fabric carriers on the frame are a great solution for dog exhibitions, any kind of travelling by car, but they are not too strong and reliable, so you should not leave your pup in them unattended for a long time. The main advantage of such a crate is its low weight and the possibility to fold it when you do not need it.

Plastic dog kennel probably offers the greatest feeling of safety with solid walls. They’re easy to clean and wash. But they’re not too well ventilated. Therefore they are perfect for transportation, but not so good for home and long time stay.

If you’re looking for something to protect your home from your beloved Spaniel and to give him a cos place to stay, the best choice is metal crates for dogs.

Where should I Place a Crate?

Placing the crate near your bed will help your Spaniel to adjust to the new environment and not feel lonely. With the right mindset and training, your dog will eventually understand that the crate is his safe haven.

Remember, do not put the crate to somewhere hot or too cold. Both hot and cold temperatures are bad for your dog’s health. In terms of hygiene, the kitchen or children’s room is not the most appropriate place either.

What to Put into a Crate?

How to Crate Train a Spaniel?

5 Things You should NEVER Do when Crate Training a Spaniel

Introducing your puppy to his new home should be in a good and positive way.

Being locked up for longer hours will not teach your dog to become obedient and socialized. It’s still important to give him proper exercise and socialization with people and other pets. Give him proper attention and don’t limit his movements. Make sure to make it up whenever he lacks physical activities.

7 Tips for Initial Crate Training of a Spaniel Puppy

It’s believed that the time your puppy can spend in the crate without going out can be calculated by the formula:

Age in months + one = number of hours. For example, a 2-month-old puppy can stay in a crate for 3 hours.

How to Crate Train a Grown-Up Spaniel?

If you’re going to crate train an adult dog, use the same technique for puppies. Make sure your dog walks safely into the crate after a toy or food without closing the doors. This is not difficult if you only feed him (!) in the crate.

After two or three days of training, encourage your dog to enter the crate without giving or showing anything. Praises, food, and toys should only be given when he enters the crate.

Give him a couple more days, then put there by command when feeding or giving him toys. Sit next to the crate, don’t close the door. Gradually increase the training time. Then try to close the crate for one to two minutes. If he barks or whines, ignore him. Praise him if he’s quite. Make your dog realize that barking is not a way to open the door.

It’s also important to let your dog know that you love him when he’s in the crate so when he leaves the crate – don’t mind him for a few minutes.

Continue doing this as you increase his stay inside. Avoid harsh words and violence. Be patient, as it takes a couple of months for an adult dog to stay in his crate. After that, it will be easier for you to crate train your dog at home or when traveling.

Crate should be your Spaniel’s safe haven. Train him properly and make him realize that it is his own space. For hunting dogs like Spaniels, crate training is good also for traveling to keep them safe and secured, and to prevent disturbance to other people. Just remember that it takes a lot of patience, persistence, and consistency to fully train your Spaniel. After that, your dog will surely be happy and comfortable staying inside his crate. 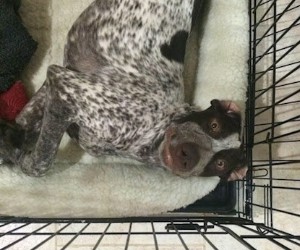 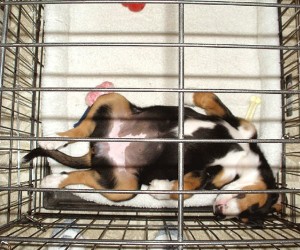 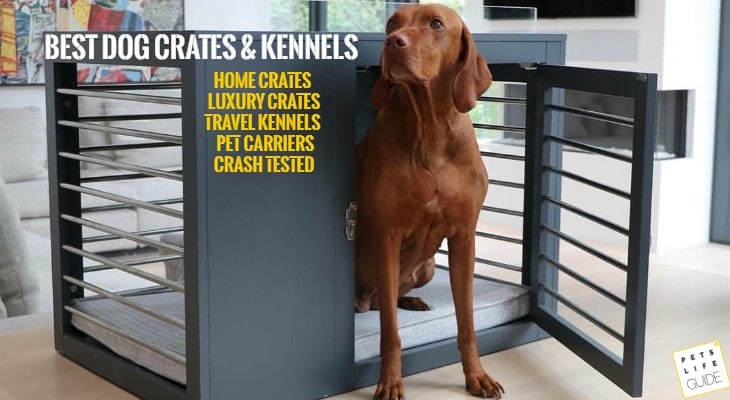